An Ancient Tradition for Mind, Body, and Spirit

Falun Gong is an ancient Chinese spiritual discipline in the Buddhist tradition. Pronounced “Fah-loon Gong,” it consists of moral teachings, a meditation, and four gentle exercises that are a truly unique and highly effective way to improve your health and energy levels.

At the core of Falun Gong are the values of Truth fulness, Compassion, and Tolerance (or in Chinese, Zhen □ Shan □ Ren □). Falun Dafa teaches that these are the most fundamental qualities of the universe, and takes them to be a guide for daily life and practice.

In the words of Falun Gong’s founder, Mr. Li Hong-zhi, “assimilation to the highest qualities of the uni-verse—Zhen □Shan □ Ren □ —is the foundation of practice. Practice is guided by these supreme quali-ties, and based on the very laws which underlie the development of the cosmos.”

By 1999, Falun Gong had grown to become the largest and fastest growing practice of the sort in Chinese if not world history. In just seven years since its 1992 introduction to the public, an estimated 100 million people were practicing Falun Gong.

Cultivating Oneself with
Falun Gong 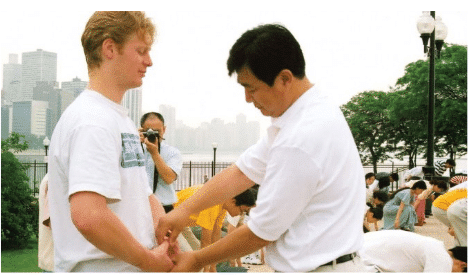 Mr. Li Hongzhi, the founder of Falun Dafa, corrects the movements of a practitioner during a group practice session in Chicago.

In Asia, spiritual practices of this variety are often referred to as ways of “cultivation,” or “self-cultivation,” and form an integral part of classical Chinese culture. Various Daoist, Buddhist, and Confucian practices fit this rubric.

Through consistent and dedicated practice, the student of Falun Gong comes to achieve a state of selflessness, greater insight and awareness, inner purity, and balance—the deeper workings of what might be called true health. Ultimately he or she approaches a state of spiritual attainment that in the Asian tradition is known as “enlightenment” or “attaining the Dao (Way).”

Unlike monastic paths of cultivation, Falun Gong is practiced in society, with students marrying, raising children, and pursuing a wide variety of careers. As such, while Falun Gong aspires to inner transformation of the self, it nevertheless typically translates outwardly into positive change in the world, insofar as the practitioner becomes a more patient family member, a more conscientious employee, or a more active member of society

Awards in China and Beyond

Falun Gong has thus been the subject of many citations, awards, and proclamations, conferred by government officials and a variety of organizations. Many who practice Falun Gong have been the recipients of service awards in their communities and at their workplaces.

The practice’s founder, Mr. Li Hongzhi, is a five-time Nobel Peace Prize nominee and was nominated by the European Parliament for the Sakharov Prize For Freedom of Thought. He is the recipient of Freedom House’s International Religious Freedom Award

Eschewing the spotlight, Mr. Li guides the practice through his writings and occasional speeches, typically at Falun Gong conferences. Mr. Li has always insisted that the practice be taught for free and available to all, and as such, all Falun Gong books, video recordings, and the like are available for free viewing online. 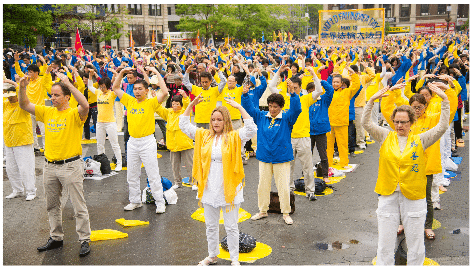 Few people today are aware that Falun Gong and its followers received much in the way of official recognition in China during the 1990s, prior to a dramatic and violent change in political winds in 1999 which saw the practice persecuted.

The same year, The People’s Public Security News—the official newspaper of China’s Ministry of Public Security—praised Mr. Li for his contributions “in promoting the traditional crime-fighting virtues of the Chinese people, in safeguarding social order and security, and in promoting rectitude in society.”

By 1999, Chinese officials went so far as to quantify Falun Gong’s benefits, such as when one official from China’s National Sports Commission, speaking with U.S. News & World Report, declared that Falun Dafa “can save each person 1,000 yuan in annual medical fees. If 100 million people are practicing it, that’s 100 billion yuan saved per year in medical fees.”

The same official went on to note that, “Premier Zhu Rongji is very happy about that.”

Today Falun Gong is practiced in more than 70 countries around the world, with clubs and associations existing in a range of cities, companies, universities, and other settings.

There might very well be one coming soon to a park near you.

More detailed explanations of Falun Gong’s practice and teachings at The Practice or Teachings & Beliefs.

For details on how and where to learn Falun Gong, visit: www.falundafa.org

Show your full lack of consent